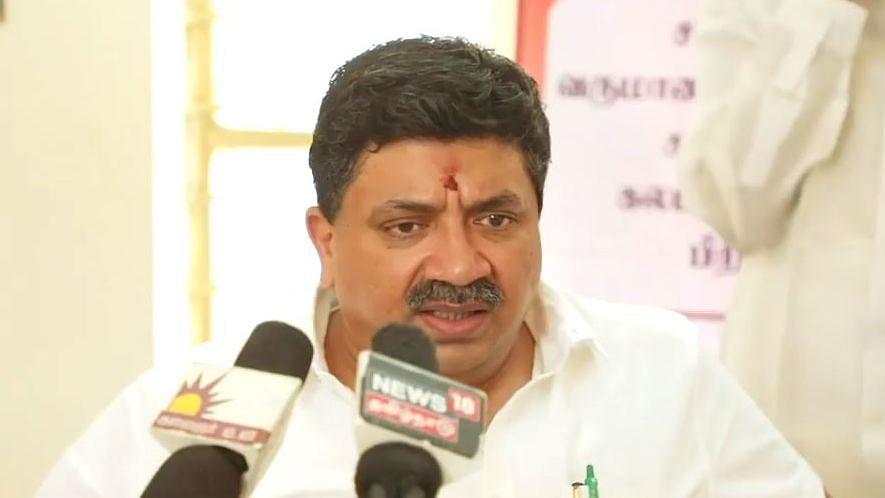 Thank you for the opportunity to present, on behalf of the people of Tamil Nadu, our views on the Terms of Reference (ToR) framed for this 15th Finance Commission of India.

At the outset, we note that our Party President Thiru M. K. Stalin has already written to the Prime Minister and Finance Minister of India, raising various concerns about this ToR. The contents of that letter have been extensively covered in the media and in public debates, and hence we will not use valuable time repeating those comments at this all-party meeting. However, we attach a copy of that letter as an addendum to our prepared remarks, to ensure its contents are recorded along with the incremental issues we record in person here.

Keeping with our President’s fundamental concerns of the Constitutionality of the Terms of Reference, we record our grave concerns about the expansive mandate given to the Commission in the second paragraph of the ToR. How can an unelected body such as the Finance Commission have the power to review the status of finances of duly-elected Governments at the Centre and States and recommend a fiscal consolidation roadmap. Keeping in mind the existence of the FRBM act at the Central Government, and corresponding Acts in most States, what is the need for an additional review, leading to recommendations? And does the Constitution make any provision for such recommendations to be binding in any way without the passage of corresponding legislation? Therefore, we see this mandate as an unacceptable and unconstitutional incursion into the rights of Governments that have been democratically elected by the people.

This paragraph also asks the commission to be guided by the principles of equity, efficiency, and transparency. The principle of transparency is both easily defined and easily justified. However, when it comes to equity and efficiency, there can be many differing ways of defining each of these principles, with varying levels of support across different sections of the society. For example, should efficiency be defined at a micro-level (e.g. success in implementing individual programs), or a macro-level (e.g. increasing per-capita productivity for a state)? Similarly, should equity require revenue sharing roughly proportional to needs irrespective of contribution, or considering both needs & contribution?More importantly, a clear definition of the principle of equity is one of the key characteristics of any Democracy. Should that not be the prerogative of elected governments rather than of an appointed commission? Therefore, we suggest that the framing of these principles be reconsidered, and either reframed or at least stated with greater detail and lucidity, to ensure they are understood well by all. We will return to this point in our later comments.

The third paragraph of the ToR asks the Commission to make recommendations after considering, inter alia, projections of Central & State Revenues from 1st April 2020 to 31st March 2025. In our estimation, it is almost impossible to make five-year forecasts with any level of accuracy, especially for a rapidly evolving country and economy such as ours. As a reference, the FRBM-related Acts across much of the country call for Governments to make medium-term fiscal projections looking ahead for 2 years only. A review of the available historical data over the roughly 15 years since the FRBM’s passage suggests that even those forecasts are well off the mark in most cases. How is a commission going to generate better estimates than most governments? Any recommendations made using such five-year estimates are likely to have unintended outcomes when real outcomes vary from unreliable projections. We urge that additional guidelines/limits be put in place to overcome these limitations around forecasting. One approach would be to recommended allocation ratios dynamically linked to medium-term averages of observed measures such as per-capita GDP or GSDP, or financial performance metrics or ratios.

The same paragraph also calls in section (iv) for the commission to consider the imperative of the New India -2022 programme. In contrast to the rest of the paragraph, the commission is urged to consider a two-year horizon for a five-year recommendation on allocation. We suggest this incongruity be eliminated by dropping this consideration altogether.

The reference to the abolition of cesses is also a questionable reference. Recent history suggests that the Centre adds and abolishes cesses at a high frequency and with little predictability. How is the commission expected to project future behaviour regarding such cesses? Instead, the commission can possible add value by recommending a ceiling on the proportion of revenues that can be collected as cesses.

Our President’s letter (attached) has already covered in detail many of our concerns relating to the various aspects of the fourth paragraph, most notably those related to control of the population growth rate (unfair to states that are already below replacement rate), progress on flagship schemes of the Government of India (unfair to states that have achieved the stated goals before the inception of the Government of India’s scheme), and control on populist measures (why is an unelected commission charged with defining any state government scheme as “populist”?), so we will not dwell on them here. We will only reiterate that the commission should consider goals and outcomes at their fundamental level, irrespective of whether they were achieved by state schemes or central schemes and should stay far away from the unconstitutional and big-brotherly action of judging the schemes of elected state governments to be either populist or otherwise.

In addition to these concerns, we suggest the commission consider other measures that are more universally and consistently reliable when picking variables to be used as incentive factors for enhanced allocation. For example, there is a well-established link between the proportion of all schoolage girls who are enrolled in school, and many measures of social development. Similarly, the extent of Female Literacy, and women’s participation in the economy as well as elected office (e.g. proportion of women among elected officials in state and local governments) have been consistently shown as leading indicators of growth. The commission should expand its terms to include such considerations.

At an overarching level, we are deeply concerned that the principle of equity, is not defined broadly enough in the ToR. The people of Tamil Nadu are second to none in their patriotism, or their desire to contribute to the development of the fellow citizens across the entire country. However, the two tables attached below highlight our serious concerns around equity. 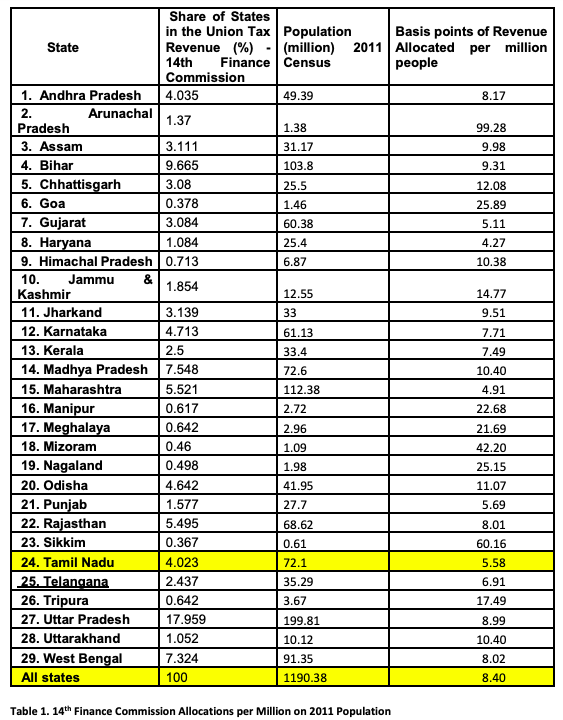 The table above shows that Tamil Nadu receives among the lowest allocations per-capita from the Central Tax Revenue Pool. We understand that there are many considerations that go into the final allocation, and that in any Democratic country bound to the principle of Federalism, there must be net transfers from state to state in the interest of inclusive development. We expect that and support the principle and the practice whole-heartedly.

However, we must also consider the evolution of such transfers in a historical context. The table below shows the history of allocations to Tamil Nadu across successive Finance Commissions, in conjunction with rough estimates of Tamil Nadu’s GSDP as a proportion of India’s GDP over the past 25 years. It is clear from the table that there is a unidirectional downwards trajectory in allocation, cutting our share down by roughly 40% in proportional terms. During this same period, Tamil Nadu’s proportional share of GDP – a rough proxy for contributions to the Central Tax Revenue pool, in the absence of statistics published by the Government of India – has gone both down and up. But taken over the entire 20-year period, the contribution is up about 13% proportionally.

Taken together, it appears that over successive Finance Commissions, there are 2 visible trends:

1) The proportion of Revenue allocated to Tamil Nadu, and similar states, has decreased significantly. Mathematically, this must be accompanied by a corresponding (and continuous) increase in allocation in other states

2) Using proportion of GDP as a proxy for progress, it doesn’t appear that such redistribution has resulted in any narrowing of the economic growth rates or output across states (using Tamil Nadu as an instant example)

If these trends were to continue or worse, accelerate, we are likely to encounter two structural issues:

1) Increasing disparity between development across the States of the Union, despite ever-increasing transfer between states through the Centre’s collection and allocation of taxes & grants-in-aid

Therefore, we urge the Commission to consider the following principles when finalizing the ToR, to stem, and hopefully reverse, these trends:

1) To use overall effectiveness in the deployment of central funds (across share of revenues as well as grants-in-aid), tracked through concrete measures such as Human Development Indicators (HDI) or percapita productivity, as key incentive factors in determining future allocations

Taken together with our earlier concerns on long-term forecasting, we urge the commission to reframe the ToR to allow for innovation, and to consider set dynamic allocation ranges for each state, using medium term performance indicators as the basis for allocation, along with strict Floor & Cap limits. This would go a long way towards comprehensively addressing concerns around equity.

Thank you for the opportunity to present our views at this meeting, and we trust you will give due consideration to our submission.